2pts
In the Blink: Episode 5 - Party in the Woods

2pts
In The Blink: Episode 5 - Party in the Woods

6pts
In the Blink: Episode 4 - Community

2pts
In The Blink: Episode 4 - Community

4pts
In The Blink: Episode 2 - Artist or Athlete?

4pts
In the Blink: Episode 2 - Creativity

When news of Tyrewiz the tire pressure sensors, came out, many of the online comments were merciless.

When news of Tyrewiz the tire pressure sensors, cam...

The 16th edition of the Tour of Britain star...

Hot on the heels of the SB165 launch, Yeti have just dropped the new SB140, a 27.5” slacked-out trail rocket designed to maximise fun for those who d...

[Video] Return to Earth – Behind the Scenes Ep. 5
Posted by
MTB-Mag

In its day, the minimalist chin guard of the very first MET Parachute full face helmet stirred up quite a bit of controversy in the helmet market. It...

In its day, the minimalist chin guard of the very first MET Parachute full face he...

Anthill Films’ In the Blink: Episode 4—Community - a look around the world at what makes our sport special

Ask almost any mountain biker what they enjoy the most about the sport and they’ll likely give you the same answer: riding with friends. The short-of-b...

Ask almost any mountain biker what they enjoy the most about the sport and they’ll l...

Video: Episode 4 of Anthill's 'In the Blink' - Community

The backbone of mountain biking culture is the community behind it.( Photos: 11 )

The backbone of mountain biking culture is the community behind it.( Photos... 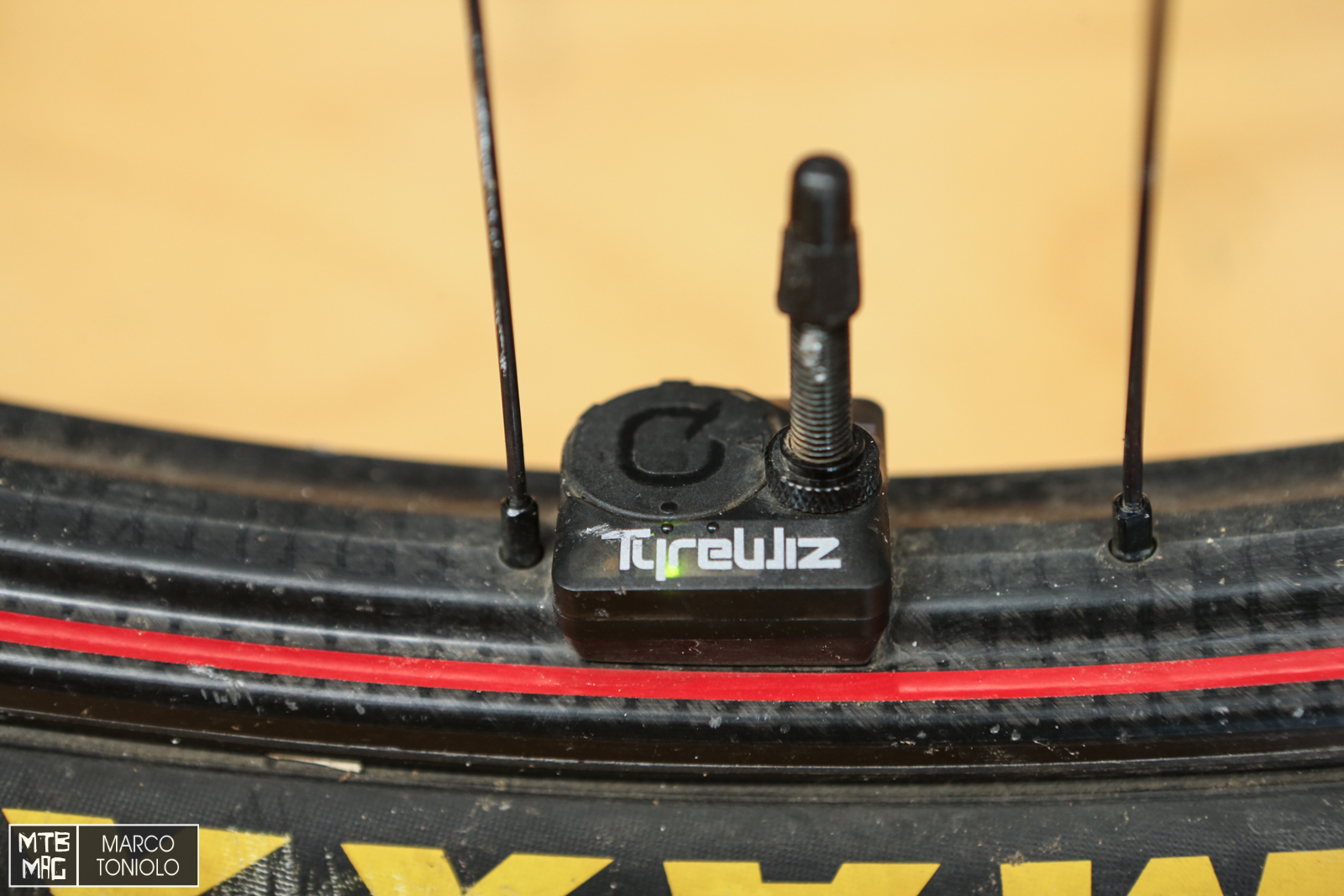 When news of Tyrewiz the tire pressure sensors, came out, many of the online comments were merciless. You can read them safely here. On the facts, they turned out to be without foundation. I have used Tyrewiz since April, and I can tell you that it is a product that deserves much more than a superficial comment. The flat shape shown above differs from those sold in stores because these sensors are fitted as standard on Zipp 3zero Moto wheels, but their operation is identical. Details Designed for mtb, road and gravel LED indicating if the pressure is high, low or correct. Data accuracy of +/- 2% Compatible with all tubeless systems that use Presta valves Also compatible with the SRAM AXS app CR1632 batteries replaceable without tools IPX7 certified for water and dust resistance BLE connection for smartphones and GPS Price: € 259 Details The Tyrewiz consists of two parts: the actual sensor, with a compartment for the battery, and the tubeless valve. This has a small hole at the height where it will be &#8220;covered&#8221; by the sensor, which in this way will be able to measure the pressure. The two small rubber O-rings, positioned above and below the hole, seal the system and prevent the Tyrewiz from becoming loose on the valve. The sensor is held in place by a classic knurled and threaded ring that usually fixes a valve to a rim Removing and installing a Tyrewiz is therefore quite simple. Put the valve through the rim, then place the sensor, screw the ring and you&#8217;re done. The pairing with the phone is fast, through the appropriate free app, while for a Garmin device it will be necessary to download the app, also free from the Connect IQ Store . On the trail Even before setting out to ride, the use of Tyrewiz starts in the garage, for setting and checking the right tire pressures. First you need to set the desired pressure via the app, so that Tyrewiz knows what to indicate to the rider, both the LEDs, both on the app and on the GPS. There is also a function that helps to find a recommended pressure based on the tire and the weight of the rider. The LEDs flash red if the pressure is too low, green if it is correct, and a fast red blink if it is too high. Similarly the indicators on the devices will have a black background if the pressure is wrong, white if it is the right one. The accuracy of the Tyrewiz, with two decimals, is immediately evident, better than many digital meters &#8211; there is no comparison with respect to a classic gauge. Rear-end pressure used on myu Canyon Strive with a Specialized Eliminator 2.35 &#8220;BLCK DMND tire. At the front I put a pressure range from 1.25 to 1.40 bar, with a Maxxis DHR 2.5 &#8220;EXO + tire. Note the black background that indicates too high a pressure at the rear. Speaking of LEDs, these allow you not to even have to look at the phone or GPS: just turn on the system by spinning the wheels and take a look at the color of the light that is flashing. Regarding their activation: if you&#8217;re on a long road trip, it is better to remove the batteries otherwise the Tyrewiz will always remain on due to vibrations. Green LED: ready to go. Red LED: if it flashes quickly you will need to remove some air because the tire is too firm, if it flashes slowly you will have add some air. Once installed, the best way to keep tire pressure under control is to use a GPS device. on bumpy descents it&#8217;s impossible to look at the display, unless you choose a screen dedicated only to Tyrewiz with a giant version of the numbers and you risk looking away from the trail, but it is still convenient to be able to look at the values ​​when you slow down or pause, to check that you have not punctured or lost air due to a burp of air from the bead. Front pressure OK, rear too high. The interesting thing, when looking at the GPS during the climb, is to see how the pressure varies depending on the temperature. A transition from cool temps in the shadows to warm sunny areas usually raises it by about 0.1 bar, which is also why you see a value too high in the image above. The opposite occurs when going from the shade to the sun. What happens, in the long run, is that you learn exactly what pressure you can get the best performance out of your tires from, because it becomes very easy to experiment and reach the limit. That is generally found when the pressure is too low and you pinch flat. It is also clear how unbalanced the values ​​of the gauges on floor pumps are and what the difference is, with the same tire and pressure values, between a super rigid rim and a more flexible one. I point out that in the 6 months of testing the Tyrewiz has always worked perfectly and that the latex has never interfered, so the valves never clogged. Rarely the signal from a sensor was not picked up by the Garmin, but it returned after a minute or two. I have yet to need to change the batteries. Overall The Quarq Tyrewiz does its job perfectly to transmit accurate pressure, and has proven to be solid and reliable in the six months of testing. If you dig below the surface, you&#8217;ll find that with this system you can understand in every sharp detail which is the right pressure for your terrain and riding, allowing you to better understand what is perhaps the most crucial variable for riding your bike. With these premises properly understood it is possible to better digest the price. Quarq Tyrewiz 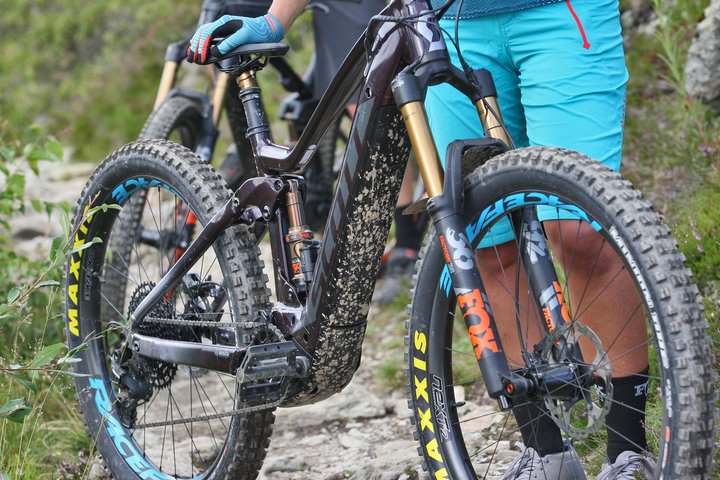 [Press Release] &#8211; One year after launching Live Valve – the revolutionary electronically controlled mountain bike suspension system – FOX is proud to introduce E-Live Valve, a version of the Live Valve system that integrates seamlessly into e-bikes using the Bosch Performance Line CX system with Kiox display. Integration with the existing Bosch system allows for Live Valve to draw the very small amount of electrical power needed to operate directly from the e-bike’s main battery, eliminating the need for a separate battery unit. Additionally, Live Valve system settings can be adjusted via the Bosch Kiox display mounted to the handlebars. Adjustments and tuning can also be made via the Live Valve mobile phone app, available for both iPhone and Android operating systems. Since being introduced only one year ago, Live Valve has achieved historic racing victories in mountain biking and other forms of sport ranging from UCI World Cup Cross-Country, the Downieville Classic All-Mountain World Championship, the SCORE Baja 250 off-road race, and beyond. Leveraging FOX’s 40-plus years of suspension knowhow, Live Valve utilizes ultra-fast reacting electronic sensors to automatically adjust the fork and rear shock independently as the terrain changes. Live Valve’s highly advanced computer algorithm monitors terrain 1000x per-second and makes adjustments over 100x faster than the blink of a human eye, providing maximum efficiency and control. The system knows if the bike is going uphill, downhill, or on flat ground and optimizes the suspension accordingly. It also knows when the bike is being jumped and opens the suspension while in the air for a soft landing. Designed from the ground up by FOX’s Advanced Products Group, Live Valve changes the way riders interact with their suspension. E-Live Valve will be available as OEM equipment from select e-bike manufacturers starting in Spring 2020. www.ridefox.com 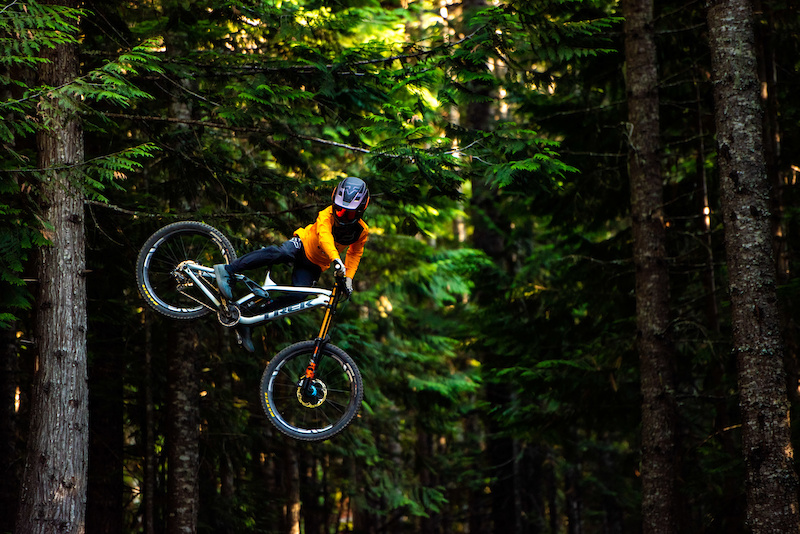 2pts
In the Blink: Episode 5 - Party in the Woods
END_OF_DOCUMENT_TOKEN_TO_BE_REPLACED