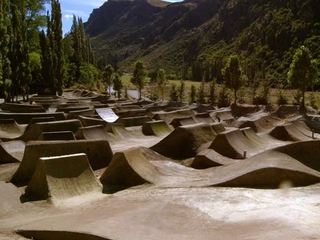 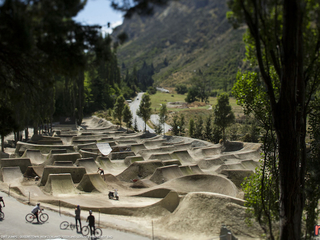 Long-term the Gorge Road Jump Park will move, but Adam Carlson, President of the Queenstown Mountain Bike Club, says land and resources will be available for a new location.( Photos: 2 ) 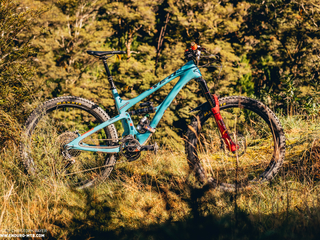 Only very few people would recognise the face of Nate Hills, but almost every biker has seen his handlebars (and we don’t mean his moustache). Nate is the creator of FollowCamFriday and has over 107,000 subscribers on YouTube. We took a closer look at his Yeti SB5 in New Zealand &#8211; and discovered some intriguing details. Nate and his workhorse: a Yeti SB5 with a custom shock. googletag.cmd.push(function() { googletag.display('div-gpt-ad-1408638783102-0'); }); Nate lives the life many bikers can only dream of: He travels the world, explores new trails, takes part in races and produces entertaining videos about all of it. For his trip to New Zealand earlier this year, he took along his Yeti SB5. Measuring in at 175 cm he rides a size medium. Thanks to the small wheels, the bike is very agile in its handling and is ready to take on demanding trails due to the increased travel, Nate revealed in an interview. Nate&#8217;s Yeti SB5 has already travelled to several places around the world, and you can see it has had a hard life. For Nate to be perfectly equipped for the rough trails of the NZ Enduro race, he used a Super Deluxe shock with a little more stroke instead of the classic RockShox Monarch Plus, and so gets 140 mm instead of 127 mm travel out of the rear end. At the front, he&#8217;s got a brand new RockShox Lyrik fork. The RockShox Lyrik offers 160 mm travel. Nate has the fork set up with 85 psi, two tokens, one click high-speed and four clicks low-speed compression (clicks from open to closed). A mudguard keeps his face and stanchions clean. At the rear is a RockShox SuperDeluxe which gives the bike 140 mm of travel instead of 127 mm. A SRAM X01 Eagle drivetrain provides the necessary range&#8230; &#8230;.with the large 36 tooth chainring, you will still need strong legs for the climbs. Because the boost frame is too wide for the Stages power meter, Nate only uses the display to record his rides and display his heart rate and the time, etc. Thanks to the BackCountry strap Nate always has tire-repair spray and a tube with him. Nate&#8217;s handlebar is 750 mm wide&#8230; &#8230; combined with a 50 mm stem. The new RockShox remote lever provides smooth control.&gt; Nate uses MAXXIS Minion DHF (23 PSI) and a Highroller II (25 PSI) tyres mounted on Roval SL carbon wheels. Both tyres have a reinforced Double Down casing. At home in Colorado, Nate rides with a little more tire pressure. To have more grip on the wet roots of New Zealand however, he decided to run lower pressures. Light, durable and not too stiff, we were convinced of the Roval Traverse SL wheels in our long-term review of them. A well-known Maxxis combo: Minion DHF in front&#8230; &#8230; and a Highroller II at the rear. Both with robust Double Down casings. Like all Yeti&#8217;s, the SB5 features the well-known Switch Infinity Link with a virtual pivot point. The damage to the paintwork suggests that the bike has already been through a lot. To end, Nate will take you to the legendary Waiora Gorge Bike Park in Nelson. The post Bike Check: Nate Hills Yeti SB5 with custom shock appeared first on ENDURO Mountainbike Magazine. 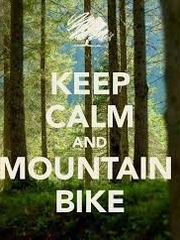 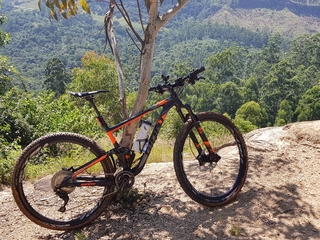 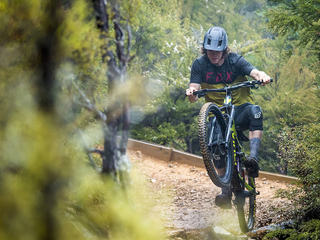 Episode 3 of The Wright Line With Keegan Wright - Video

In this episode of The Wright Line, &quot;Roots,&quot; Keegan Wright heads into New Zealand’s Wairoa Valley to session a network of flowy North Island trails known as “The Gorge”.( Photos: 7 ) 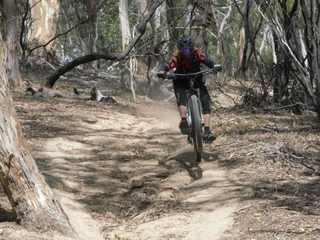 6pts
Nice shot in the gorge 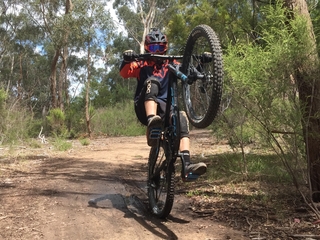 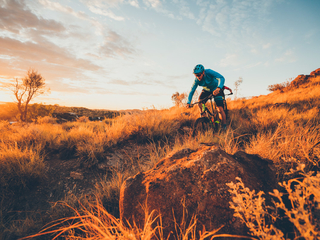 Woah, woah, woah! Did you just say $12 million? That&#8217;s correct. The NT government is getting behind mountain biking, big time, with the Red Centre Adventure Ride, an ambitious new project that promises to be one of the most unique mountain bike experiences on the planet. What does mountain biking in Central Australia look like? Watch our Ride the Red Centre vid below! Sunrise riding in Central Australia is bloody perfect. The Red Centre Adventure Ride will be a 200km multi-day trail through the West MacDonnell National Park, some of the most spectacular terrain in Australia. The ride will showcase breathtaking natural features and sites including the West MacDonnell Ranges We&#8217;ve been fortunate to spend plenty of time in this part of the world, both on the bike and hiking the Larapinta Trail which follows the West MacDonnell Ranges, and the idea of riding our bikes through this ancient, beautiful landscape is magical. This could be a life changing trail, no doubt about it. Read below for the official word from the Northern Territory government. We are very, very excited about this! The West MacDonnell Ranges are seriously dramatic. In a huge show of support for Central Australia tourism, an additional $12 million will be allocated from the Territory Labor Government’s record $103 million plan to Turbocharge Tourism to open up new adventure cycling tracks in the Red Centre. Ormiston Gorge, in the West MacDonnell National Park. Minister for Tourism and Culture, Lauren Moss said the funding will create a new tourism asset called Red Centre Adventure Ride and the project would be done in close consultation with traditional owners and key stakeholders. Minister Lauren Moss, centre, at Telegraph Station with Jacqui Schapel and Paul van der Ploeg. Today’s mountain bike plan is the 2nd project announced as part of $56.24 million allocation for tourism ‘infrastructure’. “The Territory Labor Government is Turbocharging Tourism to attract more visitors, create local jobs and put more money into the pockets of Territorians,” she said. “The Red Centre Adventure Ride will allow us to compete with other iconic mountain bike trails nationally and internationally – it will attract this growing tourist market to Central Australia and give other visitors another great thing to do. It will be more than 200 kilometres of pure outback adventure and build Central Australia’s global reputation for mountain-biking.” The $12 million to develop the new trails will create local jobs and business opportunities through the construction phase and ongoing once finished. The more than 200 kilometres of tracks will link the Alice Springs Desert Park to Glen Helen in Tjoritja/West MacDonnell National Park, creating a unique trail adventure for riders of all skill levels. “The Red Centre Adventure Ride will be Australia’s best outback multi-day ride which will help increase tourist numbers and that means more jobs,” she said. “The ride will showcase breathtaking natural features and sites including the West MacDonnell Ranges which are currently inaccessible for mountain bike riding. “Cultural values and stories will also be a key element of the experience, with opportunities for Traditional Owners to share their knowledge. The new trails open up opportunities for tourism operators to offer high-end, fully-supported guided tours, self-guided tours or luxury ‘glamping’. “New purpose-built campgrounds will also be created to give riders the chance to sleep under the outback stars in the iconic West MacDonnell Ranges.” Ms Moss said this project will complement the popular Alice Springs Mountain Bike track network which we previously announced is due for further expansion this year with new trail work on the west side of Alice Springs connecting up to existing trails in the Alice Springs Telegraph Station Reserve. All works will be done in consultation with Traditional Owners, Central Land Council and the Aboriginal Areas Protection Authority. To learn more visit www.turbochargingtourism.nt.gov.au. The post $12M Funding for Epic New 200km Trail in Central Australia appeared first on Flow Mountain Bike. 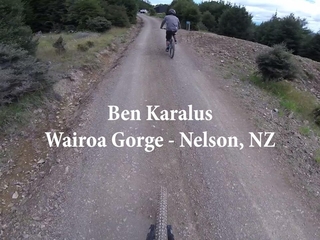